A Closer Examination of a Couple Chief Scrutineers 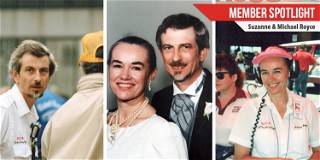 With a century of combined experience, longtime Sports Car Club of America members Suzanne and Michael Royce have taken scrutineering to a whole new level in their lives. It’s a story that began on the southern coast of Britain, developed in Michigan with SCCA’s Detroit Region, and has flourished to now include the pit garages of the most successful international motor sports teams.

The year was 1970 when Suzanne and Michael emigrated to The Motor City from England with their infant daughter, Michele, in tow. Chuckling warmly as he recalls that decision, Michael admits that “being young and naive… we left the U.K. and came over here for a couple years just to see how it would work out. Fifty years later, obviously it has.”

The couple, married in 1967, had a background in motor sports when they arrived in Motown. A left-hand drive Mini, which Michael used at SCCA events while studying at the Chrysler Institute of Engineering in Michigan during the early ‘60s, made the trip back to Great Britain with the University of Cambridge graduate. That became a plaything for the couple at circuits such as Silverstone, Snetterton, Brands Hatch and Castle Combe. The Mini, however, didn’t make the return trip to the States, meaning that Suzanne and Michael sought out a different means of involvement in motor sport upon the couple’s arrival to the Midwest.

Due to Michael’s previous relationship with the SCCA, the duo looked towards the Detroit Region and got involved as volunteer paddock marshals. An intense interest in technology and engineering soon shifted the couple over to scrutineering duties with the Region. Places like Waterford Hills, Mid-Ohio and Grattan became their stomping grounds as their SCCA expertise grew. Later, each would serve as the Chief Scrutineer for the Detroit Region.

“We have enjoyed it,” Suzanne says of the couple’s scrutineering lifestyle. “Scrutineers like cars. If you don’t physically like the cars, then you’re probably not going to be a scrutineer. A vast majority of people enjoy watching the racing, but scrutineers enjoy looking at the cars.” That enjoyment of cars provided the opportunity to develop a technical understanding of the vehicles – both as a scrutineer and as a crew member for her husband and, many years later, her son.

Fast-forward to the early 1980s and a decade of volunteer service. A married “unit” called upon for their ever-expanding scrutineering knowledge, they also played a more significant role in the Detroit Region, with Michael serving twice as the Regional Executive. In 1982, Formula 1 held its first race on the streets of downtown Detroit and called upon SCCA volunteers for support. Because of their experience, the Royces stepped in as scrutineers. And while Michael was named “Chief” Scrutineer, it was still very much a joint task with Suzanne.

Sharing is a sweet sentiment, but doesn’t always work in a regimented officiating system such as F1’s. For the race in 1985, Michael assumed a support role with Suzanne taking the lead. She has now gone on to become both awesome and legendary, recently being recognized by Federation Internationale de l'Automobile (FIA) as the 2020 Best Chief Scrutineer. FIA President Jean Todt noted her contribution along with others in other specialties from Hungary, Uganda, Mexico, Sri Lanka, Estonia and Australia.

“I congratulate all the volunteers who generously devote their time and energy to ensure the safety and success of every FIA motor sport event,” Todt stated in a press release. “Without them, we would not be able to go racing.” The FIA awards press release goes on to note that Suzanne has “worked over many years from grassroots levels, to being the only Chief Scrutineer for F1 in the United States” since the 1985 race.

“Gobsmacked” is the term Suzanne uses to sum up her thoughts on receiving the recognition. “I feel absolutely honored. But I also feel this is an award that goes to my team as well, because as chief, you’re only as good as the members of your team. Am I in charge, ultimately? Yes. But I consider all of my scrutineers to be among the best in the world. It’s an honor to work with them. Without them, I wouldn’t be receiving this award.”

The daughter of a merchant mariner, Suzanne had a passion for the sea whilst growing up in England. In the 1960s, however, it was unlikely she would find work on a ship. To circumnavigate that barrier, she studied hotel business management with the hope of securing employment on a cruise ship. And while that plan didn’t come to fruition, the education has certainly been put to good use over the years at FIA events.

“Her attention to detail, attention to planning, attention to the communications with her teams and the technical delegates … these are all things I think she learned through hotel management before we got married,” Michael said of his spouse. “Her managerial and personnel skills are outstanding and form the foundation from which she is able to apply her technical knowledge and coordinate the knowledge of her team members.”

When one looks at the tasks that must be performed flawlessly over the course of an FIA competition weekend, it’s easy to see why a well-organized individual with excellent communication skills is required to fill the role of Chief Scrutineer.

“The responsibilities are keeping track of tires, recording all of the work that is performed on the cars, and weighing and measuring them,” said Suzanne about duties usually performed between 8 a.m. and 6 p.m. over four days at FIA events. “We are the ones that will check out all of the legality aspects.”

In the 35+ years Suzanne and Michael have volunteered at FIA events, they have been privy to amazing technological advancements produced by some of the sharpest engineering minds. Significant improvements in driver safety is just one development noted by the Royces. Suzanne also notes some changes to the “art” of scrutineering.

“When Formula 1 first came to Detroit … we knew there were some measurements that needed to be performed very quickly,” she reminisced. “Our team of Detroit Region scrutineers came up with a whole series of jigs and gauges, and we were the first ones who did that. For some time now, the FIA people have had their own jigs and gauges. But we like to think, quietly, that we were the first ones who started using them so that we could get the cars measured really quickly, especially during qualifying, and very accurately as well, instead of just using a tape measure.”

Another change Suzanne found herself watching up-close was a shift in societal perceptions.

“Being female in those early days … it was definitely one of those things where some of the male chauvinists were a little ‘taken aback’ by having women there,” Suzanne recalls. “They probably figured we didn’t know what we were doing. So, they carefully checked to see what we were up to. But I get along extremely well with all of the FIA technical delegates. I have never had a problem with any of them. They are all very good. I have never felt any pressure when I’m working.”

After so many years, Suzanne and Michael still find a great deal of enjoyment volunteering at FIA and other events. There is no pay, and the quality of boxed lunches varies. But up-close access to World Endurance Championship, Formula E, Moto GP and F1 machinery inspires awe. Watching the teams at work is pretty cool, too.

“Everything is pristine,” Suzanne said. “You go into a garage and there’s no dirt on the floor, no paper towels laying around … and the mechanics are clean and well organized. They know that they are on display.

“There’s very seldom a ‘headless chicken’ stage,” Suzanne explained of the attitude in garages. “It may seem a little chaotic at moments, but they all know what they’re doing … and exactly what their job is.”

Any inkling of favoritism for a team or driver must simply not exist for those who make up Suzanne’s scrutineering team, which still includes Michael. Absolute professionalism is expected; and there are no cameras in garages, no photo-ops, no asking for souvenirs or autographs.

“We got married 53 years ago and I would do the same thing again,” Michael said about his bride. “We have sat and looked across the living room at each other and said, ‘we have done some pretty cool and interesting things together.’”

Motor sport has been an integral part of a life the Royces constructed for themselves in a new land far different from where their adventure began. Their daughter, Michele and son, Kevin, joined in the family hobby, both receiving their SCCA Timing & Scoring National Licenses before they reached their teens. As further proof of how racing has been a key component of their story, more than a third of the guests at their son’s wedding were SCCA friends.

For a couple that has given so much of themselves to the sport, it’s nice to know the sport has given something back that enriched their lives, too.

Photos courtesy of the Royce family