Busy Weekend Ends in Win for MacNeil in T2 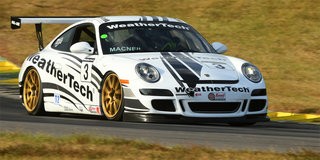 ALTON, Va. (October 13, 2019) – After a late night driving a Ferrari at the IMSA Petit Le Mans at Michelin Raceway Road Atlanta, Cooper MacNeil, from Hinsdale, Illinois, dominated the Touring 2 (T2) National Championship race to capture his first SCCA Runoffs® and Super Sweep title at the wheel of his No. 3 WeatherTech Porsche 911.

MacNeil, a second-generation SCCA driver who started racing in an Improved Touring BMW, considers the Runoffs® a must-have in the motorsports world.

“It stems back to my dad. He raced SCCA for 20 years and I grew up going to his races, watching him race, and that’s how I got hooked on it,” said MacNeil,  “I’ve won Sebring, I’ve won Petit, I’ve finished on the podium twice at Le Mans and (finished) second at Daytona. Those are two races I still want to win, but the third one was the Runoffs®. For me to accomplish that is a huge check-off on my list as a driver.”

MacNeil will fly to Italy tonight to compete for a championship in the Ferrari Challenge, but couldn’t leave without recognizing the efforts of those trackside at the Runoffs.

“I was talking to a corner worker the other day, Bonnie. She goes to her post at 7:00 a.m. and leaves at six every day,” MacNeil said. “To see the true motorsports enthusiasm that we have as a family, that’s fantastic.”

MacNeil took the lead entering turn one and never looked back, pulling out to a 13-second win ahead of Mark Boden, from Buffalo Grove, Illinois, in the No. 14 Fall-Line Motorsports Porsche 911.

Boden started fourth and worked his way up to take his second podium of the weekend.

“I got by (Rezzetano) and caught up with (Kezman) and I identified a couple of places where I was a little bit stronger,” said Boden, who finally got side-by-side with his teammate Tim Kezman heading into Roller Coaster. “I thought, ‘how far is he going to take me into the Roller Coaster? Are we going to have two cars wadded up here or is this going to be OK?’”

Third place went to Kezman in the No. 4 Fall-Line/Lemons of Love Porsche 911, who captured second place on the start, but lost the position just before the halfway mark of the race.

“We had a good start, (MacNeil) did a nice job bringing the field down and our car for whatever reason was snappy on the start and I was able to hang on his bumper and keep (Rezzetano) pinned on the outside, and then it was off to the races,” said Kezman, “(Boden) caught me and I had to let him go.”

The top-three finishing drivers made a Fall-Line Porsche sweep of the podium in a T2 race where six Fall-Line cars started.