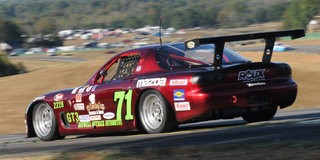 ALTON, Va. (October 11, 2019) – Jeff Dernehl, of Roswell, Georgia, sped past and outlasted the GT-3 field on Friday at VIRginia International Raceway (VIR) to claim a first hard-fought victory at the SCCA National Championship Runoffs. Chad Bacon, of Mooresville, North Carolina, and Stacy Wilson, of Englewood, Tennessee, crossed the finish line in order behind Dernehl under a full-course caution.

The GT-3 class cars are purpose built, tube-frame cars with high-strung, highly stressed motors. As Friday’s race would prove, the first step in winning the race is finishing it.

It opened with nine-time National Champion Mike Lewis battling Tony Ave, a Runoffs winner and multi-time Trans Am Champion in his own right, with Dernehl giving chase. Dernehl’s multi-colored No. 71 Roswell Outback Auto/Hoosier/RRE Mazda RX-7 moved around Ave on lap three under braking into Turn Two, then chased Lewis for an additional three laps before moving past him and into the lead down the front straight on lap six.

The action was just beginning, however.

Ave, after falling back to fourth which cooled his tires and motor, made another charge and moved into the lead on lap nine around Dernehl. On the same lap, one challenger was eliminated when Lewis pulled off course with a stuck throttle.

And it still hadn’t yet gotten crazy.

On lap 10, Dernehl spun carrying too much speed into Oak Tree Curve. That elevated Joe Kristensen to second behind Ave, with Dernehl recovering to give chase right behind. But after crossing the stripe to begin lap 11, Ave pulled off on the right side with a blown motor.

Kristensen cleared a stationary Ave by about 50 feet before his motor let go in spectacular fashion, leaving a trail of oil into the entry of Turn Two as his day ended early.

That moved Dernehl back into the lead, with Bacon and Wilson just behind, when the full course caution came out to clean up Kristensen’s oil and effectively ended the race.

The win was the first Championship for Dernehl in 13 Runoffs starts, and also clinched the season-long GT-3 Challenge presented by MPI, a series supported by Mazda, Max Papis Innovations, Penske Racing Shocks, AiM Sports and Hoosier Racing Tire. Dernehl officially led five of the 12 laps, including the all-important final stanza.

“This feels absolutely incredible,” Dernehl said. “I’ve dreamed of coming here to win this race. I’ve finished second a couple of times in absolutely heartbreaking fashion. There was always a little something that wasn’t right. This year, I didn’t spend a lot of time at the regular races. I really poured my heart and soul into developing the car and getting it faster. That paid off. The engine was an absolute rocket ship, the suspension has always been good, and it did the job.”

Bacon and Wilson were locked in a battle of their own for much of the race, originally for sixth place and further and further up the field as the race went on. Bacon earned his third career podium finish in the No. 18 CB Motorsports/TRD Toyota Celica, taking advantage of a small lap nine mistake by Wilson to move up one position just in time.

“This puts a stamp on one of the weirdest races I’ve ever been in,” Bacon said. “Me and Stacy were battling it out, just to see if we could get one of us to make a mistake. Lo and behold, I got around him … and I’m in second place. You could see cars all over the track. All of us were fighting to stay in the race. After all of the trouble I’ve had over the past couple of years, to be here is a phenomenal feat.”

Wilson earned his fifth Runoffs podium in the No. 47 Hoosier/Mazda/Wilson Racing Mazda RX-7 and his third in three starts, dating back to a win at Mid-Ohio Sports Car Course in 2016 and a bronze medal at Indianapolis in 2017.

“My car wasn’t the way it should have been,” Wilson said. “I was off the pace that I know I can run, but that’s what it was. That’s what I had and I just had to make the best of it and drive it as clean as I could. I was all over the race track, sliding off, and Chad got first hand vision of that.”

Paul Young finished fourth and Mike Henderson fifth in the race. Ken Nelson moved from 15th on the grid to 7th at the checkered flag to earn the Sunoco Hard Charger Award.