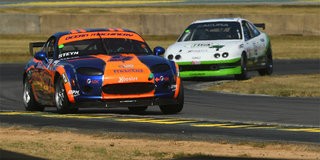 This is the second year in a row in which Steyn, from Fort Lauderdale, Florida, led every lap in the Nelson/OPM/G-Loc Brakes Mazda MX-5 on the way to the win.

“We knew this was going to be a strategy race,” said Steyn, “during qualifying everybody was making very similar lap times but we were doing them so differently if you looked at the trap speed.”

Steyn’s car didn’t have the top speed of the Hondas, requiring him to optimize the sections of track his Mazda performed better in.

“In the end I think the reason I won was, for some reason, my car was carrying a lot of speed through Hog Pen,” said Steyn, mentioning the tricky final corner named after the building performing pig-housing duties which sat near the corner for much of VIR’s early years. “Through hog pen I could gap them.”

Once Steyn built the gap on second place and worked on managing his tires, a momentary lack of focus caused a spin which could have hurt his chances at the win.

“When your managing the gap, you’re not focusing and your brain goes in different directions, “said Steyn, “I went into Oak Tree a little hot and it got away from me, the rear end stepped out and I parked the car.”

Steyn was able to make it back on track without losing the lead, aided in that effort by the battle building for second place.

On the first lap Chris Haldeman, from McKinney, Texas, in the No. 40 Mazda Miata and Cliff Ira in the No. 36 Acura Integra had a “rubbing is racing” moment in the aptly named “NASCAR” corner. Both drivers continued but Ira’s slide cost the Kansas City, Missouri driver a bit of time and allowed Haldeman to slip away, leaving Ira agitated.

“Your brain is going about a million miles an hour and my brother Greg who has a lot of experience settled me down on the radio,” Ira said, “I got focused and I started ripping.”

The brotherly teamwork was a fitting moment in an event dedicated to their late father Gordon Ira Jr., who finished on the podium of the 1970 G-Production SCCA Championship Runoffs®.

To get to second, Ira had to fight his way up to and by Haldeman, who spent much of the race in second place. Haldeman, who showed up at the Runoffs without a car, ended up borrowing the Mazda of David Palfenier, who was not able to make it to the event.

“As the race wore on it goes like every race does; you drive absolutely as hard as you can, you give it everything you have, and everything that your car and chassis has,” said Haldeman, “the car performed flawlessly and I’d really like to thank David and that entire team for making it possible for me to even drive in this class.”

Even with the fierce competition, each podium finisher echoed the praise of the class.

“STL is turning out to be a really beautiful class,” said Steyn, “Everybody is lending a hand to everybody and I feel privileged to be part of a group of racers who do that. We are one big family.”