TT Nats Saturday Morning Notebook: This Is For Everyone 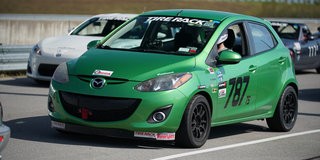 The Tire Rack Time Trials Nationals Powered by Hagerty is truly an event for everyone. The easiest way to see that is to wander the paddock and take even a cursory glance at the cars in attendance.

You’ll see some ground-up builds that were made for time attack situations – giant wings, splitters, fat tires – and those are fair game for Time Trials Nationals.

But there are plenty of daily drivers, driven to the track and home again with little-to-no modifications.

Dan Gorss traveled to NCM Motorsports Park with his Mazda2 and is having just as much fun as anyone. The car was originally his daily driver, and when he was given a free set of coil-overs the ride became just a bit too stiff for on the road every day. But it became the perfect car for tossing around the track.

“I bought it brand new and it was my daily driver for four or five years,” Gorss said. “For the last two or three years, this has mostly been a track car. It’s got an intake, and that’s about all you can do to this car. I’ve got fatter tires and brake pads, and that’s about it. I love it. A couple of events ago I finally got up the courage to turn the traction control all the way off, and it’s a lot of fun. I’m glad I got it and I’ve been happy with it the whole time I’ve had it.”

It’s become the perfect budget-friendly track car. It will take a beating and it’s easy on consumables – the perfect combination. According to Gorss, a set of pads and tires will last his entire season with little to no fall off.

So what’s your excuse?

Timed competition opened up on Saturday morning with the TrackSprint element of the weekend. Drivers began their lap with a standing start at the entry to Turn Six, ran the track until the West Course cut-through just before Turn 14, then onto the front straight and through Turn Three.

“I like this,” Joshua Thompson said after climbing out of his Tuner 4 Mazda MX-5. “The whole track is completely different. We never cut right across the track, obviously, so we’re entering four different corners at a completely different speed. Coming out of three to the finish line is more like autocross. You’re wide open the whole way through trying to cut the corner, instead of being smooth. This is exciting, it’s actually a lot of fun.” 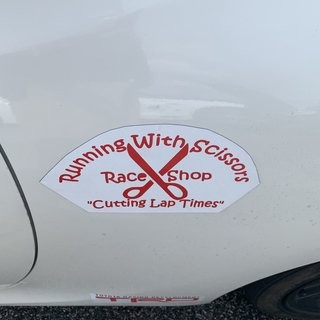 SCCA members typically like to have fun with their cars – you’ve probably seen the t-shirt. At Time Trials Nationals, that comes through in the car liveries, decals and license plates.

Of course that happens in other disciplines of the club. It’s not unheard of to see a road racing car carrying a decal of a football-playing primate, or a cone-themed license plate at an autocross.

Time Trials Nationals has issued an unofficial challenge to the rest of their fellow SCCA members, however. A stroll through the paddock revealed a Shake n Bake decal, a license plate reading “The Slow”, a tribute to the Dave Chappell show, and Running With Scissors Race Shop, who specializes in “Cutting Lap Times.”