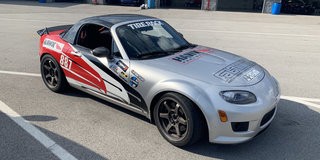 The backgrounds of the 194 registered entries for Tire Rack Time Trials Nationals Powered by Hagerty are all over the map. There are many novices who have graduated from Track Night in America to a program that keeps an official lap time. There are Time Attack participants who are running as many Time Trials-level programs as their schedule may allow.

And then there are the SCCA National Champions from Tire Rack Solo Nationals who love to drive anything they can get their hands on and are continuously looking for a new challenge. At least 12 jacket winners are participating in Time Trials Nationals this weekend. Eric Campbell, Jason Hobbs, Andy Hollis, John Hunter, Brian Kuehl, John Laughlin, Jackie Mutschler, Tom O’Gorman, Kristen Rosenthal, Alex Shchipkov, Sam Strano and Andie Wolfe are among those who have made the crossover.

But the real question is why would a driver with a professional championship like O’Gorman or nine autocross championships like Strano would come out to a purposely less intense event like Time Trials Nationals? Exactly the reason you’d think, at least according to Corvette aficionado Strano.

“I like fast cars!” Strano said. “I like to go fast. I’ve never been on this track and I’ve always wanted to be. The car’s a riot. And I had to bring it home! It grew up right over there (at the Bowling Green, Kentucky Corvette factory).”

SCCA members are racers – that’s the understatement of the year. SCCA partners notice it – mostly because they are racers, too.

Hawk Performance has been an SCCA Official Partner since 2003, and the reason is simple – they can relate to SCCA members.

When the Tire Rack Time Trials Nationals Powered by Hagerty was announced, Hawk Program Manager Taylor Allen and Engineering Co-op Jack Sawyer made plans to be at the event. Not necessarily to represent Hawk, though they are certainly doing a fine job of that. To drive.

“It’s great to work for a company that lets us exercise our passion,” Allen said. “It’s not really at work when we’re here. Even though I have a Hawk shirt and a Hawk hat on, it’s where I want to be and what I want to be doing. It makes it a lot more enjoyable.”

And while they have their foot in the gas like any other competitor, they’ve also helped more than one of their fellow racers out. That started with Allen’s presentation during the Holley Performance Day and has carried over to the paddock.

“We’ve had a lot of great foot traffic here,” Allen continued. “Our tent is pretty visual, and we had a really good turnout for our tech talk. We’ve overnighted some parts for our racers that have been having some issues and offered a lot of recommendations to fix some issues with cars and diagnose either a fluid problem or pad problem. We just want to help everybody have an enjoyable time. We’re all enthusiasts and just want to help out.”

After a test day and a practice day, it’s go time for the Tire Rack Time Trials Nationals Powered by Hagerty.

Two of the three timed sessions for the total, end-of-the-weekend score are up for grabs on Saturday at NCM Motorsports Park.

Saturday morning is the lone TrackSprint session of the weekend. After parading out as a class, drivers will launch from a standing start to run through a small, technical portion of the track and shot across the finish line on the fly in a mash-up of autocross and track driving. The best of three times goes into the total score.

In the afternoon, it’s standard 20-minute sessions on the full track to set a flying lap and best time.