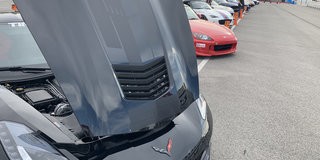 Thursday’s Holley Performance Day at NCM Motorsports Park on the eve of the Tire Rack Time Trials Nationals Powered by Hagerty became one of the best coaching sessions in motorsports, and it was all for free.

Done correctly, any of the 193 drivers registered for this weekend’s event could have shown up on Thursday morning, done a touring lap session at 9 a.m. to learn the direction of the track and then visited John Hunter and the SCCA coaching team on the car control clinic to learn your car. Satisfied with progress there, the driver would then move on down to IMSA Michelin Pilot Challenge driver Tom O’Gorman or one of five other NCM Motorsports Park instructors, who would drive your car to show you the track at speed while you sat in the passenger seat. Finished with that, there was time to get another perspective on a Virtual Track Walk with champion Andy Pilgrim, and still have time to take four 20-minute sessions on the track.

“I’ve never seen a day with this much available help, both for novices and experienced drivers,” O’Gorman said. “It’s been a lot of fun to see improvement from drivers in a short amount of time over the course of the day. It’s going to be fun for me to keep an eye on those drivers that came to me throughout the weekend and see where they end up on Sunday.”

It’s been weeks since rain has fallen in Bowling Green, Kentucky. Naturally, that meant it would happen during Time Trials Nationals. There was a bit of overnight rain leading into Thursday’s Holley Performance Days, and a noontime shower that wet the track down, but sunshine immediately following dried it out quickly.

The good news is that the forecast calls for just a 10 percent chance of rain throughout the rest of the event.

Friday is the official kickoff for the Tire Rack Time Trials Nationals Powered by Hagarty. Each of the six run groups will get three practice sessions on track, lasting 20-minutes each. Grids for practice two and three will be set by the fastest lap times in the previous session to help enable spacing for each and every driver.

Burgers, dogs, pulled pork and sides, prepared by S6 class-participant Stephen Miller, were on the menu. Beverages were consumed. Most importantly, lots of discussion, comparison and dreams of the weekend lap times were on the unofficial agenda.