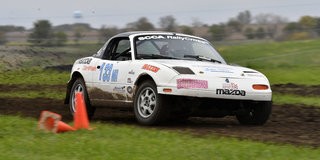 It’s time again for the Sports Car Club of America® premier RallyCross event of the year!  This weekend, Sept. 20-22, the 13th annual DirtFish SCCA® RallyCross National Championship will take place at National Balloon Classic Memorial Balloon Field. This year the event returns again to the grassy field in Indianola, Iowa, which is about 30 minutes south of Des Moines and has provided some excellent competition over the years!

Nearly 130 racers from across the United States will converge on the grounds to compete for a national championship in one of nine different car classes. Throughout the weekend, there will be dirt, mud and sod tossed into the air by Fords, Mazdas, Fiats, Subarus, Hondas, BMWs and more.

For those in the area, there is no charge for spectators who want to come out and watch all the excitement and learn more about this motorsport competition. Rain or shine, the action runs from approximately 7:30 a.m. to 6 p.m. Central Time on Saturday, and 8:30 a.m. to 3 p.m. Central Time on Sunday. If you can’t be there in person, follow along with live scoring at http://rallylive.scca.com/. A live audio call of the action can also be accessed here.

As SCCA’s most widespread and readily accessible form of extreme motorsport, RallyCross is a scaled-down version of a rally stage laid out on a non-paved plot of land where the course is delineated by traffic cones instead of trees or rocks. Participation requirements are considerably less than those associated with other forms of performance rally, so drivers usually only need a mechanically sound, hardtop vehicle and a helmet to come play in the dirt.